Matt Pritchard shares a middle name with the star of The Mabinogi, and was a prolific hell-raiser in his Dirty Sanchez youth. Now starring in BBC1’s cooking TV series, Dirty Vegan; this self-proclaimed “business man” has also been nurturing his Sleep When You’re Dead brand for the last 5 years. Meryl Cubley asks: Has the former bad-boy become a man? 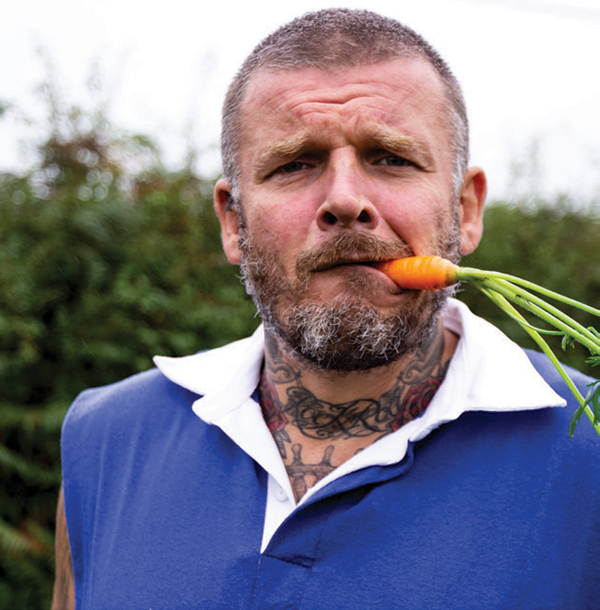 Matthew Pryderi Pritchard walks into Costa coffee near his home in Pentwyn fizzing with excess energy. “I’ve tried the classic meditation practices and I just can’t do it – my head moves too fast. I know it’s meant to be really good if you can get it working… I just can’t. I’ll stick to my endurance training.”

With branches in Cardiff and Bargoed, his tattoo and male grooming parlours Sleep When You’re Dead are sure-fire hits. ‘’I can’t believe I’ve been a business man for five years!”

Known to most as the sometimes-peroxide blond prankster in MTV’s stunt-tastic Dirty Sanchez, it could be said that he shares certain characteristics with his (middle) namesake, the prominent figure of Welsh mythology – Pryderi fab Pwyll. “It’s a famous Welsh story; and my Grampy’s name was Pryderi, so my mother thought she’d use it as my middle name, to carry the tradition on.”

Pryderi is described as “…bold and enterprising, but rash to the point of foolishness”, in Jeffery Gantz’s translation of The Mabinogion. Pritchard’s crazy escapades in his youth are certainly noteworthy; including eating a cow’s eyeball when he was in Dirty Sanchez: “Not very vegan – but I wasn’t a vegan then, so…” he says this with a sideways smile and an insouciant shrug that instantly turns the clock back 20 years.

Growing up Lakeside wasn’t always easy for the younger Matt Pritchard: “My mother was a bit of a hippy; she used to shop in Spice of Life in Roath, which is still there today, and where I still do quite a bit of my own food shopping; I’m a believer in supporting local independent business… (but) there were times too, when we didn’t have much money, so my Mum would soak bread in milk and bake it in the oven to make it look like food, fair play.”

Following a Welsh-medium education at Glantaf Comprehensive he attended catering college; and went on to work at a restaurant on City Road. The experience cut straight through his burgeoning enthusiasm and skill for cooking and destroyed any desire to work in the food sector. “I had a really bad experience… I was very badly bullied… and to cut a long story short… it really put me off the entire food industry. I just left. But I’ve come full-circle now and really rediscovered my passion for cooking and good food.”

A lot has been written about his ‘vegan epiphany’, after watching the documentary Cowspiracy. But what can get lost in all the talk of the film, is that Pritchard originally began to research veganism when he realised premium athletes were following the diet: “Pro athletes were all over the plant-based diet, and that interested me, because of my own endurance training; I wanted to know why. Then I thought where do we stop? Do we eat dog, cat, horse? I went pescatarian first – and then later – vegan.”

His own endurance training is testament to a determined spirit: “I’ve always been one of these people who says go hard or go home. I did Iron Man. I did tons of Welsh Triathlete competitions. I just loved it. We’ve got ten Iron Man challenges over ten days coming up soon… I just really enjoy doing that kind of stuff. It keeps my body healthy – and it works for my mental health too – I like to switch off from everything, to go inside my own head and to push myself. I get away from everything that’s going on… it clears my brain…”

Despite his male-centred career, his mother is a very important figure in his life, just as Rhiannon was to Pryderi in the original legend. And where there’s a mythological prince, there must be a princess. Matt indeed has his own ‘Cigfa’ too: “She’s Irish, and lives in Dublin, so it’s a long-distance relationship. We’ve been together for 9 years. Before the Dirty Vegan thing kicked off I had a lot of time on my hands and I’d go out there and spend 3 weeks in Ireland. I don’t have the time to do that now – but she comes over here and we see each other on weekends. We’re getting married next year in Ibiza.”

It’s not clear where the couple will live post-nuptials – but Pritchard is in no rush to ease up on his business commitments: “We are talking about opening up a restaurant – in fact everyone’s talking about it – yes, the rumours are true,” he laughs. “We don’t have a location yet, but it’ll definitely be in Cardiff.”

As the interview winds down, we chat about what he’s up to at the weekend: “This thing I’m doing on Sunday – up and down Pen y Fan mountain – twelve times in twelve hours. It’ll be fun! It’s my meditation!” And with that he’s gone, fizzing off into the sunset, with that trademark rocket-fuel energy.

Tasting the World in Wales